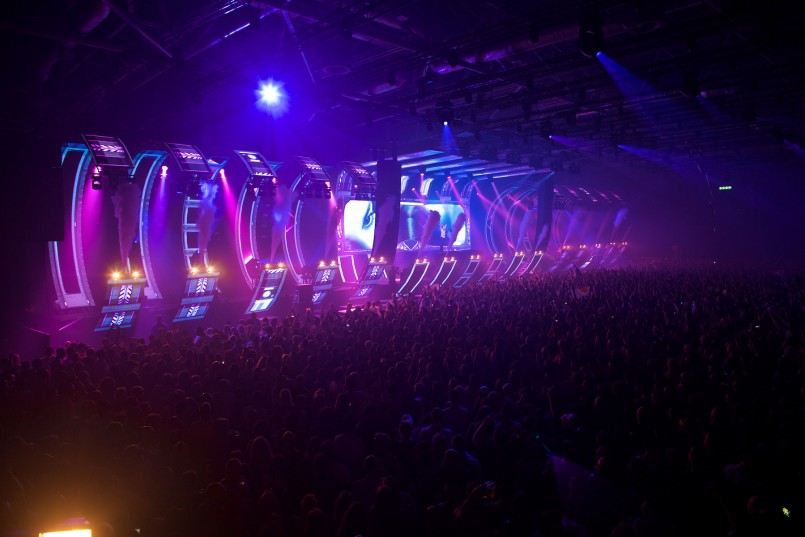 Well this was one big fat giant. was the white whale of ‘em all… . Temperatures went from minus forty degrees in Moskow to blazing Miami heats in no time and we felt like Captain Ahab as we arrived in Miami. It was the eighth time for G-Productions touring with Armin’s and all the ingredients were there for another great tour.

With every tour there are more aspects involved, the crowds get bigger, the venues get bigger, the listener base gets bigger and the team gets bigger. The difficulty is to provide a quality product to all of them. In environments where circumstances can differ from double star, thumbs-up and A-Okay perfect, to eerie shimmer worlds of bad wiring and reception this is a constant challenge. Well, Challenge Accepted!

Time consuming as it is, is not the only show on Armin’s plate. He is the busiest guy on the planet and the same goes for his production agency . ALDA events was simultaneously producing the , and ASOT#650. Having expertise in on-location sound and logistics G-Productions was approached to organize the first leg of the ASOT#650 tour in Moscow.

The location changed a few times during the run up to the show, but eventually was selected to kick off the first leg. The sound setup in The Artist Club was great, but upon arrival G-productions decided to add eight 18- inch subwoofers to give the party that real ASOT sound.  When we turned on the subwoofers full blast it was starting to rain, first a drizzle, then a shower and then a hail. Confetti that had been stuck to the ceiling since the nineties rained down on us, while the bass was deafening our senses. What better kick-off to a world tour can a guy ask for.?

It was minus 35 degrees… that is COLD for a human being! Fortunately Jelle set up a perfect studio upon arrival and we managed to man a desk wearing mittens (it’s a lost art really). The show in Yekaterina was the first show held at a big venue this tour, with over 15 thousand visitors. As the night progressed temperatures got from minus 35 to steaming hot. It only made sense then that the production was ended by a SNOWBALL FIGHT IN A SWIMMING POOL. They just fuck cold in the ass in Russia..

The Dutch leg of the ASOT tour was previously held at the Brabanthallen in Den Bosch.This year however the dutch demand for tickets was so great that ASOT had to move to a new venue. A convention centre in the middle Holland was selected to host.  The size of the venue was so immense that you had to rely on roller skates, bicycles, mopeds, golf carts and hoverboards to get you from point A to B. Twenty minutes of walking from one area to the next was daily routine.
After estimating the distances between the areas we figured out it would take more duct-tape to secure the fibreoptic cables to the floor then the Mythbusters needed to build that raft out of it. Or build a bridge of duct-tape, that one is good too. Fortunately we were able to secure all the fibreoptics to the roof.. All 20 kilometres of it were hoisted onto the roof that was over 20 meters (60 ft.) above us.
G-Productions facilitated streams for all 4 stages on a : Who’s afraid of 138, ASOT Invites and the Talentroom were being broadcast separately, while Mainstage was broadcast live on ASOT. Over 40 dj-sets on 4 streams were simultaneously broadcast to a worldwide audience of millions, that were all eager to hear Armin play a home game..!

Buenos Aires was like coming home It was the 2nd time ASOT was in Argentina which mend a reunion of friends. , a very talented photographer and the one who showed us Buenos Aires like no other the first time around came to meet us at the airport. Marc van der Aa is the in-house photographer  on the ASOT tour and is responsible for more than half of the pictures you see on our site. For more artsy work check his
The location for ASOT in Argentina was incredible. An old and abandoned amusement park near the edge of town. The park looked like it was frozen in time. All the rides were overrun with foliage and the whole park gave the impression of a post-apocaliptic world. Fortunately the local sound equipment was in bit of a better state. When we say a bit, we mean a bit as the Madi lines of our Digico failed within the first half hour of the show, so thank god for again!

Outside Broadcasting Van, Front of house, Stage, Radio Studio.
All signals 12xHD SDI video, Some robotics, 3 screens in house, 30 signals from the ceiling.
On HD-SDI we have 8 audio and 1 HD video, combined them all into one big matrix.
The G-Productions live radio flying setup, based on the Riedel Mediornet Network
With our beloved s and Audisi GML players
the Pro-Tools HD
the Digico SD24
nd loads and loads of macbooks….

This one seems obvious, but it needs to be said up front the iphone is seriously cool, and not just original ipod cool, which way back when was wow, that looks really nice, but I can’t afford it