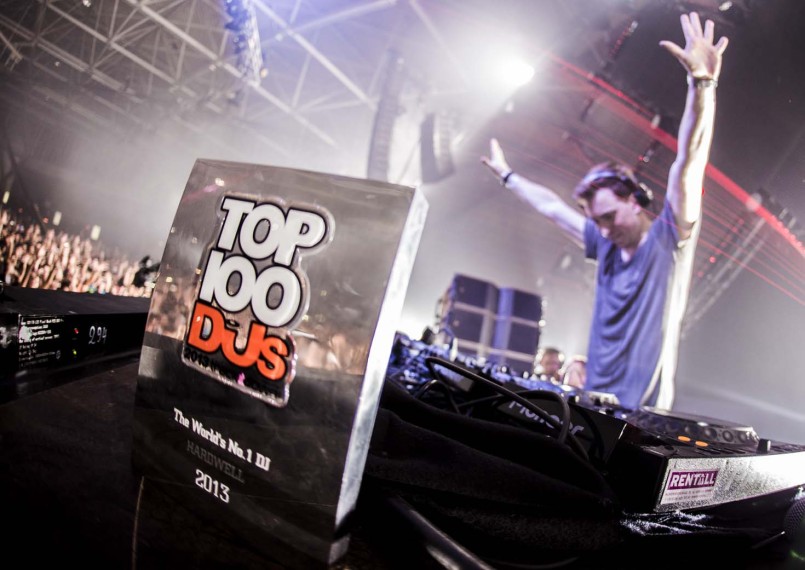 CLIENT: Nomobo tv (Ultra, Hardwell, Red Bull).
G-Productions was responsible for all live and recorded audio during this 6 hour live broadcast from Amsterdam.

This year ADE was bigger than ever, and the schedule of G-productions was booked to the brim. Not only did we produce a 3 day live show for the biggest EDM orientated radio station in the Netherlands, , we were also responsible for the live audio feed of Hardwell presents; revealed on Friday in the PTA Amsterdam.

During ADE Saturday we produced the Amsterdam Music Festival in collaboration with Nomobo. We mixed all audio for the video productions of our buddies at Nomobo. It was at the ADE that Hardwell was crowned the number 1 dj of the world (The award ceremony was broadcast live on Dutch national television so we had to work hard for a change). Every area had their own control room, and because the RAI is such a huge exhibition center NOMOBO had up to 15 KM of fibres running back and forth to all of the 3 content locations.

We invited our friends at because the’ve claimed that with the use of new audio processing algorithms they could get close-to-CD quality on YouTube! We were absolutely blown away by the sound quality Peter’s little shiny box produced. MAAK VERGELIJKING WOLF OF WALLSTREET eedless to say we own one ourselves now.  as well as all the the viewers around the world were ensured the best audio quality ever for a music festival live-stream on YouTube. Our best friends for live Peter & Peter from Orban really came through…..

All mixing took place in OBV 14  of UNITED broadcast facilities  on a studer VISTA deks. Enough channels to do the job so to say…. On the picture a very happy Gijs.

Last year G-productions was producing a show for ASOT 600 in and while we had some time to kill we got chatting to who is a good friend of G-Productions and Nomobo. Oscar is a cameraman, entrepreneur and all around slick individual.

Nomobo is one of the key players when it comes to on-site video reports for EDM festivals across the globe. Their productions are always shot with top of the line equipment (think helicopters, drones 40 meters Cranes )and you can see the fondness for EDM in every production they do.

We offered to help them out for the Miami Ultra Music festival as we were going to be there any way with Armin v Buuren. It was a kind turn for G-productions to stop by and give some advice where necessary. Helping them out at the Ultra Music Festival in Miami resulted in them getting in contact with G-productions for the Amsterdam Music Festival. The rest is history.

After the DJMAG 2013 awards we had some trouble getting back in gear as you can imagine. Fortunately Danny Tenaglia took care of that for us on ADE sunday 🙂